Divided we stand? Towards post-corona leadership.

The Hague Centre for Strategic Studies and DISCvision Behavioural Economics jointly address this question in a short essay. The context of the article is the fact that the Covid-19 virus provides the world with a global challenge that can only be tackled by the combined effort of nations worldwide.

The starting point of our analysis is two observations. The first is that the world order that regulates international relations is largely the result of the interaction between major nations with a predominantly liberal culture on one side, and major nations with a more state controlled culture on the other. The second observation is that in times of existential crisis, nations tend to rally behind their leaders. During a crisis, more so than under normal circumstances, individual leaders may decide the course of an entire nation. 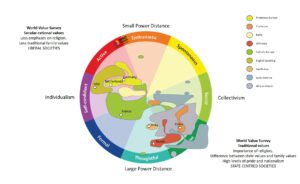 We address this question by looking at the cultural differences between nations, the need for collaboration and the different leadership styles from our current leaders. We propose some scenarios that may arise in the aftermath of the Corona crisis – based on the national interaction between culture and specific leadership styles. Multilateral cooperation is required to best deal with the Corona crisis and its aftermath. This is especially prescient as experts warn pandemics are here to stay. However, the International relations are increasingly approached as a zero-sum game in which one’s gain is the other’s loss. How will his tension play out during the next global crises?

Our approach here is to explain and, up to a point, predict their behaviour by combining three angles. The first and leading approach models individual leadership styles. The personal leadership styles are expressed using the DISC model of William Moulton Marston, which describes the preferred behavioural and communication style of an individual.  The second describes the cultural context in which the leaders operate. The differences between cultures are explained using the Culture’s Consequences model of Geert Hofstede.  Both models are used throughout the world. Of course we, start with the widely known World Value Survey.

The essay is structured as follows:

Town centres in the post corona era, it’s now up to the municipalities!

By Andre Doffer and Herman Kok The corona pandemic has clearly changed the way consumers shop. In Holland, the PBL expects vacancy to increase by about 40% in the coming years. It is therefore very important to consider the new role of town centres in the post corona era. In the first instance, it is […]